Jason Galvin is a multimedia journalist from Southern California.  His start in journalism came three months after graduating high school, when he was hired by KHTS 1220-AM in Santa Clarita, California to work on high school football broadcasts.  Two years later, Galvin was promoted to Sport Director, a position he held until mid-2011.  In between, Galvin also started announcing NASCAR and NHRA racing at Irwindale Speedway.

Through his association with Irwindale, Galvin got his first big breaks in journalism: a job as a features writer for automobile aftermarket manufacturer K&N Filters, and a spot on the SIRIUS NASCAR Radio broadcast crew for the 2011 Toyota All-Star Showdown.  During this time, Galvin was also producing and anchoring weekly news and sportscasts for his community college, College of the Canyons, and its Cougar News program.

In August 2011, Galvin moved to Phoenix to pursue his bachelors degree at Arizona State University’s Walter Cronkite School of Journalism and Mass Communication.  After the move, Galvin was hired by Speed51 as a commentator on NASCAR K&N Pro Series races for NASCAR Home Tracks Radio.  Galvin also began working at Phoenix International Raceway as an announcer in 2012. 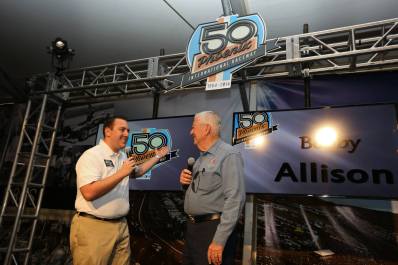 In 2013, Galvin was selected to cover the Milwaukee Brewers for the Milwaukee Journal Sentinel through a partnership with Cronkite. While covering the Brewers, Galvin was hired by USA Today to write a front page article on the return of Brewers All-Star Ryan Braun to training camp following allegations of steroid use the previous year.

During his time at Cronkite, Galvin wrote for both House of Sparky and the Walter Cronkite Sports Network, covering the Arizona State football team, providing analysis of the team and expertise from his time as a football coach in California. 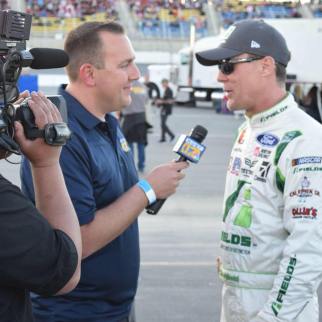 In October 2014, Galvin ventured into local news as the weekend sports anchor and news reporter at KGET-TV 17, the NBC affiliate and market leader in Bakersfield, California. In his second week, he showed his versatility, helping lead coverage of the crash of SpaceShipTwo. Galvin produced and anchored an Emmy-nominated documentary on the McFarland High School cross country program, just ahead of the debut of Disney’s McFarland, USA. 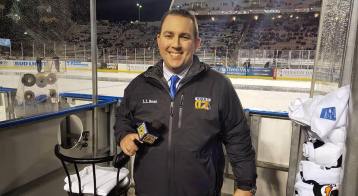 In February 2018, Galvin took over as the voice of CSU Bakersfield baseball. Every Roadrunners home game, as well as the Western Athletic Conference tournament games, can be heard live locally on ESPN Bakersfield 1230 AM/101.1 FM or streaming live online.

In March 2018, Galvin returned to his racing roots, co-hosting the five day pay-per-view coverage of the 60th March Meet drag race in Famoso, California. Galvin now lends his talents to MAVTV, a national motorsports network, as a commentator and host of Madera Racing, a short track in central California with a national following.

Jason and his wife Krystyn, a nurse, reside in Bakersfield with their dog, Sophie Rose.